This photo is taken of  the bride ready for church at her parent’s house.  It was taken at the lovely Maria and Nick’s wedding in 2014.

I like to use the posts in my “Hey, remember this?” series  to explain why I like a photo and what makes it, for me, an interesting photo.

As you can see, Maria was waiting at the top of the stairs..  The bride’s father was waiting for her in the living room which was to be the first glimpse of his daughter in her wedding dress.

Whilst I was waiting for everyone to congregate in the living room,, I noticed the bride’s mum having the finishing touches done to her hat.   She was pretty much aligned with her daughter upstairs.   I backed up as much as I could at the top of the stairs so as to create a photograph which had both the bride and her mum in.

It’s obviously not a traditional photo of the bride and her mum but it shows a story of the bride waiting in anticipation to make her entrance (and looking very happy) whilst her mum was quickly having some last touches done to her hat.   I’m sure I took photos of Maria waiting at the top of the stairs on her own too but by adding her mum into the scene, it creates more dimension and more storytelling to the photo.

So as you will see, as a documentary wedding photographer, the final photo is not always about one focal point, it’s taking into consideration the surrounding components and deciding if they add to the photo or distract from the photo.

I hope you like the photo I have shared.   I have been lucky to see Maria and Nick again and to meet their beautiful children since their wedding day. 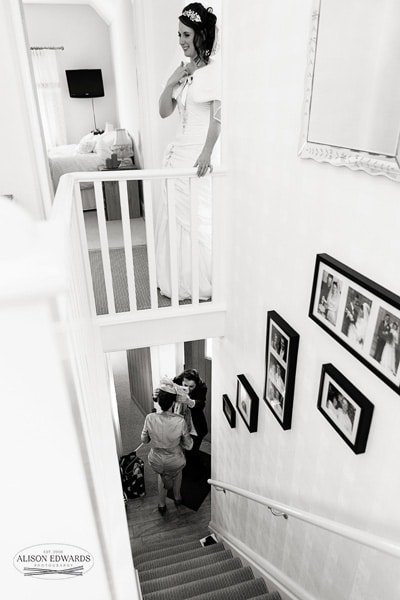